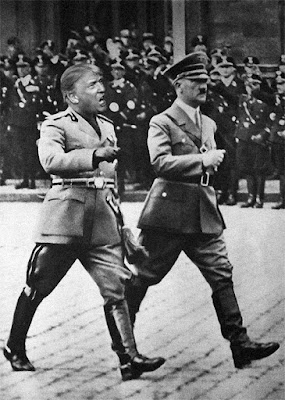 I have a recollection from a history class that after World War I, the Treaty of Versailles prohibited the unification of Germany and Austria– Anschluss. Unification was one of the goals Hitler laid out in Mein Kampf. In 1934 Austria’s fascist Chancellor Engelbert Dollfuss was assassinated by pro-Anschluss Austrian Nazis in a failed coup. His successor, Kurt Schuschnigg, was also a fascist and also resisted the idea of unification with Germany claiming Austrians were racially superior to the Germans. He had local Nazis rounded up and put in concentration camps. Hitler went crazy and made a series of demands that increasingly exterminated Austrian independence until in March of 1934– to prevent a plebiscite– Hitler invaded Austria, breaking the Treaty of Versailles. The Austrians greeted the German troops with wild enthusiasm, flowers and Nazi salutes. Hitler toured the country the next day announced Anschluss. Although there was some rumblings of disapproval from Britain, Italy and France, it was just hot air. Mexico’s protests were louder. Austria’s Jews were immediately targeted with the aggressive approval of Austria’s non-Jews. The following month there was a plebiscite to approve the unification and it passed with 99.7% of the vote and Austria became the German province of Ostmark. In London, The Times likened the union as the same as Scotland having joined England 300 years earlier. Austrians generally became enthusiastic Nazis and in many cases, even more so than the Germans, contributing, aside from Hitler himself, lots of Nazi leaders including monsters like SS General Ernst Kaltenbrunner, Jewish extermination chief Alois Brunner, Nazi operative Otto Skorzeny, and, of course, Adolf Eichmann.

In the early 1970’s– probably ’72 or ’73– I got stuck in Innsbruck for about 5-6 months. World War II was long over but the people there came across as a real bunch Nazis, especially the older ones. It was pretty horrible and I would escape to Munich, across the border with Germany or through the Brenner Pass into Italy and to Venice whenever I could. I guess because Vienna was so cosmopolitan and sophisticated it came across as far less of a Nazi bastion that little Innsburuck in Tyrol.

Yesterday, Austria elected a neo-Nazi chancellor, Sebastian Kurz, although U.S. media, or at least those bothering to report on it at all, refer to him and his facsist People’s Party as “center right.” The People’s Party is more known as a cesspool of corruption rather than a cesspool of fascism, but Austrian voters– overwhelmingly Nazis themselves– are always happy to embrace both. Kurz’s freedom party increased it’s share of the vote from 2017 from 31.5% to 38.4% yesterday. The center-left Social Democrats went down from 26.9% to 21.5% and Kurz’s junior partner in the coalition government, the even further right Freedom Party did pretty badly– down to 17.3% from 26.0%, probably because it had worked with the Social Democrats to bring down the People’s Party previous government after a video-taped corruption scandal exploded.

The Greens share of the vote went from 3.8% to an impressive 12.4%, making it a major player in Austrian politics. The pro-EU party (NEOs) increased their share of the vote from 5.3% to 7.8%. These are the estimated number of seats in the 183-Parliament each of the main parties will hold: 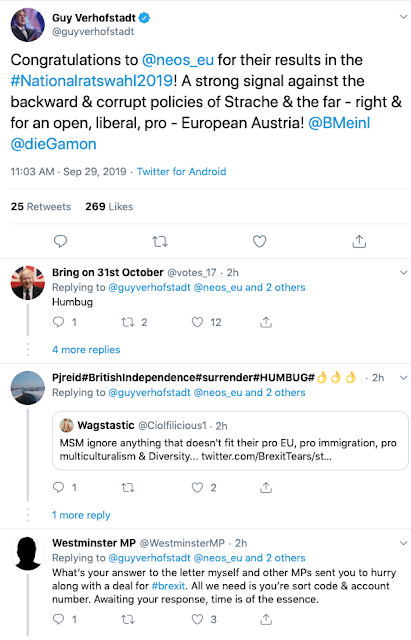 So, since we’re talking about fascists… strange how Trump seems to be working so hard to fracture Fox News! He was certainly storming away on Twitter about Fox over the weekend. He really got into the exchange between Ed Henry and Mark Levin yesterday. Martin Pengelly of The Guardian had the best report I saw, Trump jumps shark with retweets attacking Fox News host. He started by making the point about Señor Trumapnzee’s well-known fear of sharks. “Trump,” he wrote, “may be the great white hope of the Republican party, but his dislike of sharks is well known. It seemed odd, then, that in a Sunday feeding frenzy of retweets attacking a Fox News pundit, the president gave voice to a bot that seeks to satirise his rampant galeophobia.

Trump appeared to have been watching TV at the White House, before leaving for a second straight day at his golf club in Sterling, Virginia.

On Fox & Friends, host Ed Henry had asked radio host Mark Levin if he thought the president did anything “illegal” in the 25 July phone call with Ukrainian president Volodymyr Zelenskiy which is at the heart of impeachment proceedings.

True to form, Levin reacted angrily. This seemed to please the president, who retweeted more than 20 tweets about the exchange. 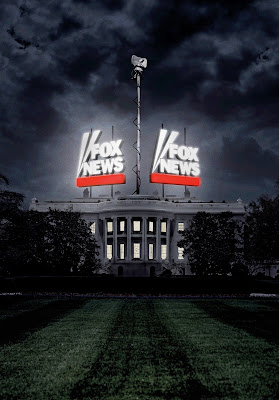 One referred to another Fox News anchor whose coverage of the Ukraine scandal has stoked turmoil at the network: “Can we face off Levin and worlds [sic] worst anchor Chris Wallace?”

Others included: “Mark Levin ripped Ed Henry a new one” and “Mark Levin sure put that lying shit head Ed Henry in his place didn’t he?”

In less vulgar fashion, the president also relayed a message from @TBASharks.

The account is a bot, full title Trump But About Sharks, which explains its mission thus: “Trump apparently hates sharks, so this bot does some word replacement on his tweets to make them about sharks.” 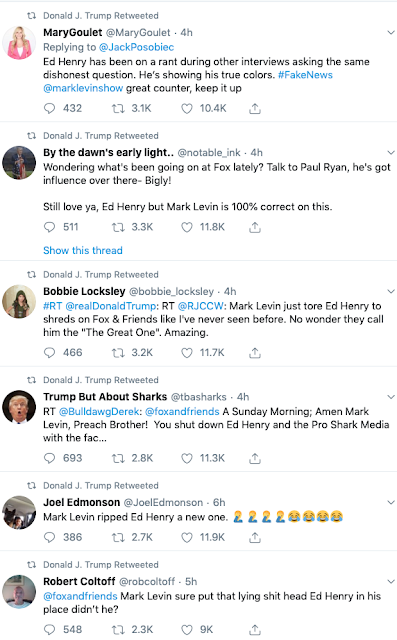 The message retweeted by the president therefore read: “RT @BulldawgDerek @foxandfriends A Sunday Morning; Amen Mark Levin, Preach Brother! You shut down Ed Henry and the Pro Shark Media with the fac[ts].”

The original tweet, which Trump also retweeted, referred to “the fake news,” a common target for Trump if not usually including hosts of Fox & Friends.

Trump’s fear and dislike of sharks is well established. In 2013, two years before he emerged Jaws-like from the depths to savage the body politic, he tweeted: “Sharks are last on my list– other than perhaps the losers and haters of the world!”

In 2018, the adult film maker and actor Stormy Daniels revealed that during the brief affair she claims to have had with Trump in 2006– which he denies– he enthused about a TV special about a shipwreck.

“It was like the worst shark attack in history,” said Daniels. “He is obsessed with sharks. Terrified of sharks.

“He was like, “I donate to all these charities and I would never donate to any charity that helps sharks. I hope all the sharks die.’ He was like riveted. He was like obsessed.

Alan Grayson, after reading Trump’s deranged threats to stoke up a civil war, had a comment, addressed to Trump: “Note to Donald Trump: nobody gives a damn about you, you self-indulgent fool, and nobody is going to war for you, even though you do exhibit a slaveowner mentality that this country hasn’t seen much in the past 150 years.” I thought it would be a good way to end the evening.

Fascists In Austria, Fascists On Fox News, Fascist In The Oval Office